What is the Easiest Poker to Play?

“What is the Easiest Poker to Play?” – we are frequently asked this by beginners and players who want less of a challenge. After all, winning is only fun when you’re confident in how well you understand poker games.

Five-card draw pokers are the easiest to play and understand. And the easiest five-card poker to play will always be Texas Hold’Em, thanks to its simple setup. There’s also three-card poker, razz, and a few others we will briefly get into below. 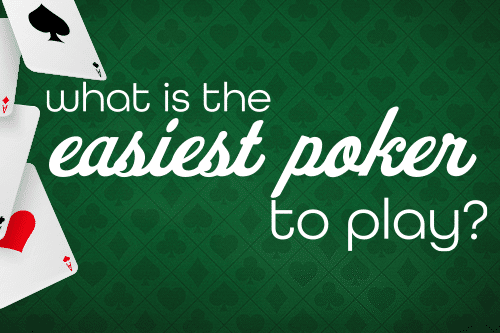 Texas Hold’Em, because the game is much simpler than other variants that involve Omaha, Seven-Card Stud, or Five-Card Draw. The game is one of the most popular variations in the game of poker. It has numerous variants that are all over the world. And it has earned its popularity for many reasons, including features in famous films.

Each Texas Hold’Em game features four stages: the Deal, the Flop, the Turn, and the River. In the first stage, you’ll get two cards face-down to hide from the other players. From then on, the cards are dealt face-up on the table for everyone to use. These phases will always end with a betting round and the opportunity to walk away.

Unlike standard poker, you play Three-Card against the dealer instead of other players at the table. To start a game, you’ll place an ante wager and receive three face-down cards from the dealer. Each player then looks at their hand to figure out if further bets are needed. If your hand is better than the dealer’s, you’ll win.

While it’s one of the easier versions to learn how to play, 3-Card carries one of the worst house edges for players. So, we recommend practicing for free online before committing to a real money table.

Fans of Texas Hold’Em should have no issue with playing Omaha because the differences are so slight. In this variant, you receive four face-down (hole) cards from the dealer instead of two, which ups the ante.

After that, your moves remain the same, though the hand combinations are far more exciting. Additionally, you can try the Hi-Lo version of Omaha, which allows splitting your cards into two hands for the highest and lowest hand.

Last but not least is Razz Poker, which flips the script on all other poker versions. In this variant, you have to make the worst hand possible from the available cards.

The player with the lowest value hand will win the pot if their five-card combination is the worst. Your best possible hand is also a mere ace, two, three, four, and five because straights and flushes don’t count.

So, What is the Easiest Poker to Play?

We like to think that five-card poker games are the easiest to start playing, though it’s up to individual online casino players. Most of the time, Texas Hold’Em is the easiest poker to learn. There are multiple reasons why it is preferred over others, including more complex betting options, and no player tracking.

Best of all, the fact that Texas Hold’Em is used more frequently by professional players. Three-Card Poker has a track for each player, Omaha has no tracking, and Razz Poker has the lowest house edge of the four poker games mentioned.

Best Casino of of the Month

Home » What is the Easiest Poker to Play?