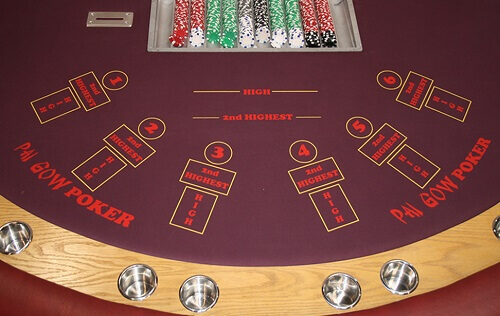 Pai Gow Poker is a version of the Chinese game of Pai Gow played with cards instead of dominos. The game was invented in the mid-80s and has grown in popularity since then. Whether you are familiar with the original Pai Gow or not you will enjoy it once you understand how it works. Because this is such a specialty casino game, not all online casinos have it.

This means that not many players know about the game online, but this can be an extremely enjoyable casino game. The odds are pretty good and players can win good payouts. Before playing Pai Gow Poker for real money, it’s important to know what you’re doing.

Therefore, we have put together a list of top casinos that stock the fascinating game. Additionally, we have attached an easy to follow strategy guide of how to play the game.

How to Play Pai Gow Poker

To learn how to play this variant you need to understand the difference between it and what inspired its birth which is Pai Gow. Pai Gow is played with dominoes while Pai Gow Poker is played with a deck of 52 cards with a single joker.

Since this game merges the exciting game of poker with the oriental dominoes game, it’s the players’ aim is to make two poker hands, one with 5 cards and the other with 2 cards. This will be out of the seven cards each player gets. That hand combination must beat the dealer’s hand combination.

There is a hierarchy of hand combinations like in poker. If you want to give the game a chance need to understand the Pai Gow Poker rules, strategy, and different bets.

Pai Gow Poker makes use of a deck of 52 cards with one joker. The joker is similar to what a wild is in online slots. This is because it can substitute any other card to form a winning straight, flush, straight flush or royal flush. It also has the power of an Ace when it’s not in winning combination.

This game has three basic rules:

The best hands in Pai Gow Poker are similar to poker hands with two exceptions. The best five-card hand is five aces made up of four aces and one joker, which as we said earlier has the rank of an Ace. Whereas in traditional poker the best hand is a Royal flush. The second-highest ranking hand is the straight flush A-K-Q-J-10 and the straight but A-2-3-4-5 and lastly the K-Q-J-10-9.

A List of the Best Hands in Pai Gow Poker

How to Win Pai Gow Poker